Originally I wasn’t particularly interested in seeing Lourdes – could’ve taken it or left it. But Heather was, and encouraged by our friend Zabette (born in Paris but now living in Australia) who said we must see it, even it was only for the ultra-commercialisation, I figured it might be worth putting in an appearance.

Well, I was certainly glad we did. It was eye-opening, specifically the areas leading down to the Grotte Massabielle where in 1858 a 14 year old Bernadette Soubirous allegedly saw an apparition (ultimately 18 times), of Our Lady of Lourdes, who many decided must’ve been the Virgin Mary.

Walking down the Rue de la Grotte we passed shop upon shop stuffed full of every conceivable religious souvenir. I had never seen anything like it – there was so much religious ‘bling’ that every shop glowed, shone and sparkled.

As we neared the massive Cathedral of Our Lady of Lourdes which sits over the famous Grotte, more and more people seemed to flow from every street and passageway. Swept along with the tide we ended up in a sea of people, wheel chairs, hospital beds and crutches. I promise I will never complain about an unsightly pimple on my face again. What an eye-opener. Hundreds of people waiting to either get a glimpse of the Grotte or just attend the open air Mass being conducted right near it. There were people with all sorts of afflictions plus, of course, people just interested in seeing all this. So in order to make sure I didn’t miss out on another once-in-a-lifetime opportunity, what did we do? We hopped on the line of course!

I wanted to see this little spring which was such a focal point to the whole story. (Evidently the apparition told Bernadette to have a drink so she dug a hole and up popped this spring). There are taps nearby where you can fill up containers with the water and there are also stalls where you can buy candles, mostly very large candles. Then there is a long line of stalls full of burning candles. These are cleared out and replaced with empty stalls for more burning candles.

So much hope and faith in this small area – people had come from near and far. This is a pilgrimage sight visited by millions through the year, particularly in the summer. When we were there the summer season had not really begun, we were told by locals, yet there still seemed so many visitors.

We later visited the cathedral above with its huge colourful mosaics, stained glass and gilt. Meanwhile the crowds were arriving out the front in preparation for the 5pm mass. Many of them were in hospital beds and would not have been able to go into the cathedral easily, so the mass would be offered for them outside. Even when we were leaving, there were still people flowing into the square. We were both glad we’d experienced this extraordinary scene.

Footnote: When I was shuffling along in that line nearing the famous little spring, I felt a drip of water on my head which came off the rock above. I hoped this might have meant that my own personal miracle was about to happen – that thick head of hair I’d always wanted… I’m still waiting.

PS Lourdes disturbed me. All the incredibly ill people in wheel chairs and even hospital beds hoping for a cure, or some sort of solace, or their carers hoping for this for them. The priests, nuns and brothers speaking with people… I wanted to talk with them and ask them how they saw it all but of course couldn’t with my limited language skills. Later I found out there is support in several languages including English but those I spoke to weren’t able to tell me this. Of course the trinket sellers are always there if there is a spectacle of any sort. And I wondered about the young Bernadette – what would she make of it all? Of course Lourdes wouldn’t be the prosperous city it is today had this not all happened. And most of all how does organised religion fit (or not) with a personal search for the spiritual and sublime? 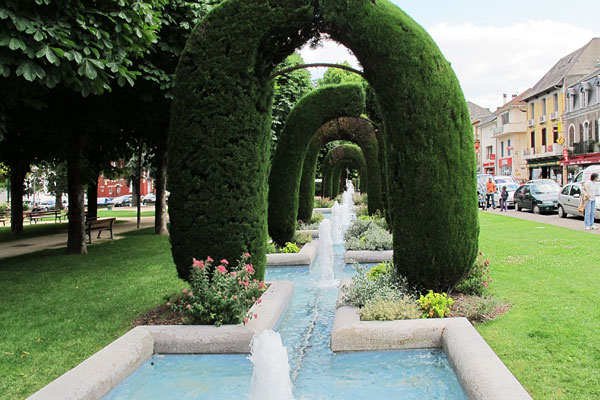 Lourdes has some beautiful public spaces

This entry was posted in Heather and Tina. Bookmark the permalink.