We’re in Paris again. I know a lot has happened before we landed here (and a lot has happened since) but I really want to share this small but wonderful exhibition titled Slow Art – part of the Paris Designers’ … Continue reading → 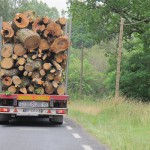 PS to the previous post… On the road home we followed this truck carrying a humungous stack of logs – overloaded would be an understatement. Back home the cops would be straight onto you if you attempted this kind of … Continue reading →

Again on advice from Ben and Diny, we set off on another day of timetravel – back to prehistoric caves or grottes in the Vezere Valley around Les Eyzies. Even during the ice ages there was still vegetation in this valley providing wood for fire, and food for fish and game. So life for our homo sapien ancestors continued here almost fourteen thousand years ago when a lot of Europe was under ice.

Unfortunately the day we were at Les Eyzies, the main prehistoric museum for this whole area was closed. Then we found we had to book in for the grotte tours – numbers must be limited to reduce risk of CO2 damage to the caves and their contents. So after wandering about the little town for a bit we toddled off to a café for café et gateau. By this stage I had decided to give up on cappuccinos. They just aren’t in to them over here. Straight black coffee is the best option, and it goes so well with the local sweet specialties no matter where we seem to be!

In the Grotte de Gaume the black and red manganese oxide together with iron oxide changes in the light to provide a sort of iridescent chroma, changing from dark blue to pinky violet. There are lots of bison and reindeer in this cave, beautifully rendered with accurate perspectives and proportion utilising the undulations in the cave wall to enhance the 3D aspect of the animals. There is a particularly lovely depiction of one reindeer licking the nose of another. And I am sure Picasso was somehow influenced by these bulls and bison in his portrayals of bulls and minotaurs…

As the day went on there was either smoke or mist or both which made visibility outside quite hazy. Thankfully it shielded us a bit from the heat, but it also evoked a time travelling mood.

Roc St Christophe is truly amazing. It is a whole different troglodyte experience. A whole city once stretched from the river docks at the base of the cliff, up about five levels along ledges. We’re told people have lived here continuously for about 50,000 years until the town was destroyed finally during the wars of religion. At first it just looks like rock, but when the details are pointed indicating the blacksmith’s area, animal pens, the old docks and the machines for lifting materials up to the higher edges, the main street and buildings off it, shops, a safe, the church, a dungeon, sentinel points, a point where rocks were thrown from a great height down onto hostile boats… The past came alive again in a whole different way. Truly, follow the link, select the English flag, and go on a virtual tour yourself. (The video narration is still in French but it is still worth your virtual visit.

After Roc St Christophe, if we hadn’t been booked into Grotte de Combarelles, we probably wouldn’t have gone. But again, quite different, it is another absolute treasure. It is a very small cave long cave. In fact the floor has been excavated so visitors can walk through it rather than crawl, as our ancestors would have done. (And of course this protects the priceless walls.) As well as being so cramped, the artists, who would have been burning torches, would only have been able to stay in there for a maximum of 5 minutes at a time before the oxygen started running out… which makes their creations even more amazing. The walls are rich with etchings and carvings and painting using manganese oxide and the images become animated in the flickering torch light – bison, reindeer, an auroch, people and strange symbols.

Our guide, a native of this area whose forebears have been no doubt been here as far back as the last ice age, took on a magical persona himself, playing up the mystery of this artwork and the artists who created it. It almost felt like the artists had only just left, or maybe were still watching from the shadows to see what we think of it all.

Diny and Ben were a valuable source of information when it came to giving us the low-down on what was happening around the area fete-wise. There seemed to be celebrations of some kind or other popping up all the time – things only locals would know about and tourists wouldn’t normally stumble across.

This latest impending ‘do’ we were told was the Fete du Feu – the midsummer Festival of Fire – to be held at a small hilltop village called Belaye, only half an hour away and overlooking the gorgeous Lot River. There was to be a BBQ-spit roast, an acrobat-clown and a gypsy folk band plus assorted other kinds of acts celebrating…well…celebrating fire.

After informing us of this fun-fest our smiles quickly turned upside down when Diny said that the dinner was all booked out. …But we still could go and watch the performances and entertainment.

We’d already had a long day at Sarlat and its markets, then at the gardens of Manoir de D’Eyrignac, but Sharon and I stunned ourselves by having enough energy to head off to Balaye in search of clowns and gypsy bands while Heather fell in an exhausted heap. (Being midsummer, the bonfire and entertainment didn’t actually start until 10:30 or 11:00 pm!)

Sharon and I arrived as a beautiful sunset gave way to a stunning twilight. The crowd (mostly quite young) had obviously eaten their sumptuous BBQ. All that was left were the shimmering embers of the BBQ and many dirty paper plates. The crowd were also showing obvious signs of having indulged themselves in the local wines as well.

At sunset the Fete du Feu bonfire was to be lit. But the weather had been extremely hot, and everything was very dry, so there was a fire ban all through the region. The Feu stayed unlit. (We’d seen quite a number of bonfires set on our travels for this widely celebrated tradition, but all would stay unlit. Surprising to us, it didn’t seem to be a problem lighting the BBQ.)

As the twilight melted into night, on came the acrobat-clown. He juggled things, balanced on a ball, and fascinated the children. But for me, the highlight was the all-girl gypsy band made up of 3 generations. The grandmother and her daughter must’ve given birth at a very young ages because to me they just looked like a mother and daughters. They were great – playing their fiddles, accordion, tamborine and singing.

But in all drunken crowds there always seems to be one idiot who has to be just that – a drunken loud-mouthed idiot. He yelled and tried to outdo the girls like a braying donkey. Luckily some of his friends took him aside and managed to subdue him. But I felt sorry for the girls in the band as it detracted from a fabulous performance which many decent bystanders were trying to enjoy and support.

I don’t know what time it was when they finished but as the fire ban was preventing any more of the planned fire spectacles, we decided to beat the hoards to the carpark. It was going to be an absolute bun-fight getting out through the narrow streets and down the hill. Evidence soon confirmed this as we passed a car with its wing mirror dangling by one wire after someone had obviously made a hasty exit ahead of us!

A garden ‘proud as a peacock’

Because of the very long days at this time of the year, after the markets at Sarlat we went to Les Jardins du Manoir D’Eyrignac. It is deep in the countryside with nothing else much around at all. In spite of the heat, we thought this might be shadier and cooler. We slowed down as we wandered through 10 hectares of gardens and 50,000 metres of sculpted hedges and trees.

The gardens of the Eyringnac Manor epitomise the quality and excellence of the traditional art of topiary. It is like a living sculpture garden where each sculpture demands ongoing attention but a team of specialist gardeners. Yew, box and hornbeam are shaped into features within a dramatic garden backdrop. Pathsways leads from room to room in what is like a huge open air palace.

The property has belonged to the same family for more than 500 years, and the present owners are totally committed to carrying on the legacy of the property and garden and sharing it with the 80,000 visitors it has each year. (When we were there it certainly didn’t feel at all crowded!)

‘Proud as a peacock’ is a phrase originally coined by Gauthier de Costes de la Calprenéde (what a name!) – a French writer who lived in Eyrignac Manor in the 17th century. So it is most fitting that this beautiful garden and proud heritage of French gardening is still found in the Perigord.